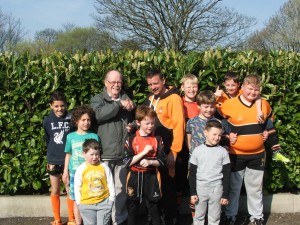 The under 11’s received a cheque for £120 from Blackpool Rugby League Supporters Group to help with the costs of establishing the team, entry in to the NW Counties Junior league and other set up costs. Pictured are the squad and coach (Darren Hardy-Dearness) at a recent Sunday morning training session receiving a cheque from the chairman of the Supporters Group, Ray Connelly. The squad have been invited to act as mascots for one of the teams at the forthcoming RFL Summer Bash, to be held at Bloomfield Road on 27th and 28th May 2017.

The summer Bash will have 14 teams playing in 7 games over two days and initial plans are for the under 11’s to be mascots for the Toulouse Olympique team when they play Halifax on Saturday 27th May.