A massive effort from Stanley players old and new meant the 4-hour challenge was not only completed but done so with style and vigour!

It was under clouded skies, at 11 o’clock the game kicked off in modest fashion with just four under 14s up against a few of the old boys, in an area adjacent to the main pitch.  The youngsters immediately put one past their opponents but the seniors soon steadied themselves and came back strongly, their experience and superior communication paying dividends as they showed the youngsters a thing or two.

By 12 o’clock both teams were reinforced by some fresh legs, with eight year old debutant Jane Stretton 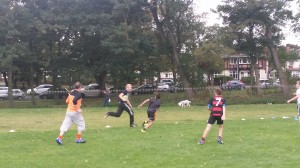 joining the now flagging elderly chaps to make a startling first impression with a few cheeky scores in rapid succession. The opposition responded right away, upping their game, with youthful exuberance now outfoxing the scrambling defence of the old codgers. Not even a spell of rain could dampen the shared enthusiasm as both teams continued powering up and down the pitch.

Shortly after 1.30 and a hot-dog lunch, the game shifted up another gear with a move to the vacated main pitch and player numbers further bolstered by the under 16s who had only just completed a tough match against rivals Bury Broncos. Despite the fatigue, the new configuration injected some much needed energy and creativity, with play further reinforced for the old guys with a masterclass from Jimmy Airnes.

With the sun now shining, the hectic pace continued until the last half hour where more than three hours of trying to show the youngsters how it’s done was taking its toll on one or two of the elders, the game now stretching long-dormant muscles to painful extremes.  Even so, the tries kept coming for both sides with the score at the final whistle completely unknown as everyone was having too much fun to bother keeping score.

But the score didnt matter as everyone was a winner on the day, the fun-o-meter had gone up to maximum and the display had generated sufficient interest amongst the spectators that the Club had enquiries from several new players.  The Club extends its thanks to every one of the players, spectators, fund raisers and sponsors for making the Challenge a brilliant Club event.

To get their kit vouchers, fund raisers are now asked to collect all monies due as soon as possible and pass these with their sponsor forms to Darren Hardy-Dearness (see key contacts)