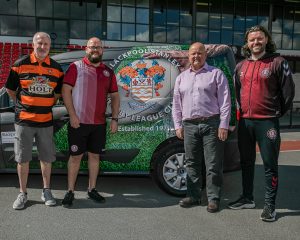 Blackpool Stanley are pleased to announce the launch of a Rugby League Development Project. The project is a result of a collaboration between Blackpool Stanley, Wigan Warriors and Blackpool Council (Active Blackpool).

The project will have a 3 year duration and has been primarily funded through Blackpool Stanley reserves along with contributions from a number of other sources including Blackpool Council, Wigan Warriors and Blackpool Coastal Housing. The funding means that the project will be Free to the recipients and that Blackpool Stanley can maintain its policy of keeping Rugby League free for all its participants, removing affordability as a factor to becoming involved in Rugby League.

The project sees the club establish a new partnership with Wigan Warriors. Blackpool Stanley bring 43 years of local rugby league knowledge to the partnership whilst Wigan Warriors will bring resourcing and knowledge and expertise of delivering similar projects elsewhere across the North West.

The project has appointed a full time Development Officer, Tom Marsh. Tom will continue to be employed by Wigan Warriors and be a link from the project in to the resources of The Warriors, whilst Blackpool Stanley will manage the funding of the post throughout the 3 year term. 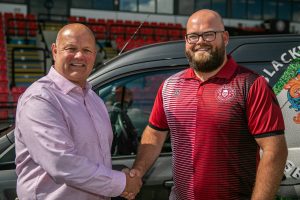 The project plans to initiated girls (Year 7 & 8) RL in St Mary’s Catholic Academy as a way of gauging interest in the sport and with a view to developing girls RL at Blackpool Stanley.

The project will also fund the recruitment and training of volunteers to develop the infrastructure of Blackpool Stanley so that more young people can become involved in teams at the club. Anyone wishing to get involved in this exciting project by volunteering can contact the club for more information (www.blackpoolstanley.com).

Over the 3 year term of the project it will grow beyond the catchment area of the club and help grow Rugby League across all of Blackpool and surrounding areas.

The project started in September 2022 and the club have begun to establish teams at under 9, under 11 and under13 ready for the 2023 season. Anyone in school years 3 to 6 for boys and girls and school years 7 and 8 for boys who are interested in trying rugby out whether they have tried rugby before or not and whatever their ability are welcome to join one of the teams. For more information, contact Dave Staples via the club website www.blackpoolstanley.com.

Simon Hornby, Chairman at Blackpool Stanley, commented ”this partnership, brought about with the help of Blackpool Council, will not only help with rugby league participation locally in this world cup year but also help with health and well being amongst our local community. Our policy of Rugby League being FREE at the point of delivery will continue and thrive with more participants, making Rugby League affordable for all. We are convinced that in Rugby League we have a great product that will appeal to a much wider audience and that the game of rugby league across the Fylde Coast will thrive as a result of this project.”

Tom Marsh, Blackpool Stanley Development Officer, commented “I am really excited to start this new role working with Blackpool Stanley to help create new teams and get more people playing Rugby throughout Blackpool. As we are 3 weeks into the new school year the 4 schools, I have been working with closely all seem to be really enjoying the sport in the sessions and I am hoping that they all decide to join Blackpool Stanley in the near future” 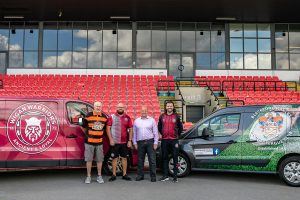 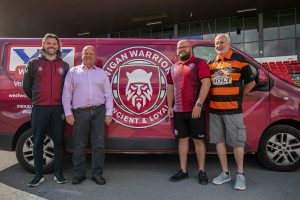