Stanley travelled away to St Helens to take on Portico Vine. A game in which tensions were running high even before kick  off. Stanley performed well as  a  team with high standards of discipline for a victory over Portico. 26-16.

Portico kicked off Stanley receiving the ball to complete the first set rewarded with a try for Roberts and a conversion by Hall. Stanley continued to apply the pressure and McCory set up Jones for a try but due to a knock on was disallowed on the try line.

Portico took advantage at this point to score and convert.

Stanley’s Christiansen, Schofield and Diss applied pressure to reward Hall with the second try and conversion.

Portico stepped up their defence to deny Birch a try at halftime.

Stanley kicked off the second half overturning Portico’s  ball for Owen Christiansen to score centre posts for an easy conversion by Hall. A hard tackle received by Stanley’s Joel  Diss ended his game injured. Portico were not for giving in and came back to score a further 2 try’s at Stanley’s misjudgment. Stanley didn’t take this lying down and with great team pressure by all the team, Jones and Birch were rewarded with a further try each not converted  to end the game 26-16. 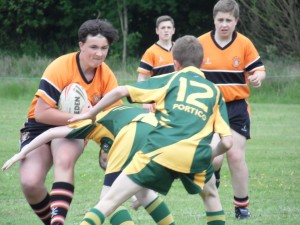