Remediation works have started on the pitch at Kingscote Park. The current hotter weather has meant that works funded by the Parklands Area Forum in April/May has now been able to start.

The council Contractors were waiting for some drier weather before installing a field drain along the Kingscote Drive side of the pitch, see picture to the left of the completed field drain.  This was made necessary by the re-appearance of a long standing underground stream to the South West corner of the playing area (the area at the front of the picture). The field drain is now installed taking excess water away from the pitch area and will no doubt be tested further once the wetter months come along. 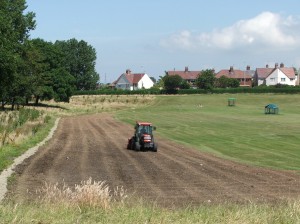 pitch has also started. This strip of land was disturbed when the ground heat loop was installed for the heating and hot water systems for the building, and natural settlement had left the surface bumpy and unplayable.

It is anticipated that the pitch will get a good covering of grass during the primary grass growing months of July and August (and possibly September) before being marked out and new sockets installed ready for the erection of posts at the start (March 2015) of next season.

The club has also requested that the pitch be moved towards Grange Road by approximately 30 metres this will mean that a wider pitch (circa 63m) can be established as the initial pitch was only 50m wide and would have proved unsuitable for youth and senior rugby in the next two to three years.

This represents a major step forward in the clubs long standing ambition to have all of its activities centred at Kingscote Park. Should the works run to schedule and prove successful the club will be playing it’s home games at Kingscote Park from March 2015.