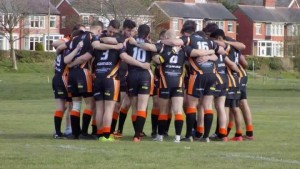 Division 5. The application for entry has been accepted by the RFL and is expected to be ratified by the NW Mens Management team in early January.

The club anticipates that fixtures for this division will start towards the end of March 2017 and will means that regular scheduled Saturday afternoon fixtures will be established at Kingscote for the first time.

The club also expects to run a development team in the NW Mens entry league in 2017. This team will accommodate those who aren’t selected for the division 5 side and also those who are graduating from last years under 16 team.