A number of new recruits have recently joined the club from a number of sources boosting Stanley playing numbers. 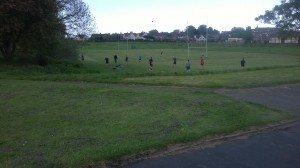 Acting Coach, Joe Connell said, “it’s great to get good numbers at training. It allows us to try more things in training and build team spirit along the way”. Recruits have come from a number of sources some have played the game before and some are new to it and trying it for the first time. Numbers have been growing week on week and the club is certain of scheduling fixtures soon

Club Secretary, John Gill, commented “registrations have been an issue this year and we have struggled with the new online system to get sufficient numbers registered for fixtures. Now most of those issues are resolved we are close to scheduling fixtures for the team.

The club will be active in the NW Mens merit league allowing fixtures to be scheduled around the availability of players and so avoiding league fines for missing scheduled fixtures. As the club re builds and grows then we will look to re-enter the NW Mens Division 5.