A new playing kit has been ordered for the under 14 and under 15 teams from O’Neill’s sport wear. O’Neill’s hope to have the new kit to the club before the resumption of the playing season in September 2013. The new kit is 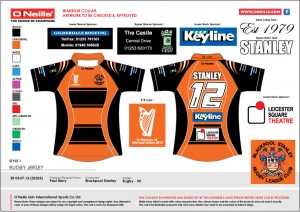 the first to be bought from the Irish sports wear giant and NW rep for O’Neill’s, Paul Berrym commented ” we hope that this will be the start of a long and successful partnership with Blackpool Stanley. O’Neill’s already provide kit to a number of other NW community clubs and we are proud to be adding Blackpool Stanley to our list of clients.
The club have taken the opportunity of including the logos of a number of long standing supporters / sponsors on the new shirt which has been largely funded via a donation from Andy Dolan. The shirt carries a memorial logo in memory of Andy’s late father and also includes the logo of the Leicester Square Theatre company who have recently made a generous contribution to club funds.