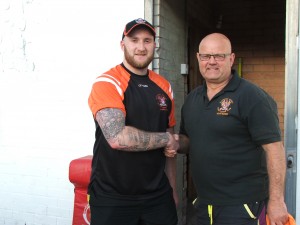 The club is pleased to announce the appointment of Brett Whitehead as Head Coach at the club. Brett joins the club at a time when we are looking to rebuild the Open Age side following the departure of a number of players from last years squad

Brett has a solid background in rugby league having started his playing days at Blackpool Scorpions in the youth teams, before playing for Wigan St Patricks at under 18 level and progressing to a number of professional clubs most recently Hunslet and Hemel.

Chairman, Simon Hornby, commented ” it has been a long process finding and appointing a new coach, but we feel that Brett represents a positive appointment that will ultimately be worth the wait. He has been involved in and understands the local rugby league scene and the importance of developing local rugby league talent. In the past we have looked to supplement numbers with players from rugby union, ultimately this can only be a tactical solution and our strategic aim needs to be to develop a long term supply of local rugby league players”.

Bretts initial objective will be to grow playing numbers and grow the fixture list such that next year we have a strong case for entering the North West Mens league division 5.