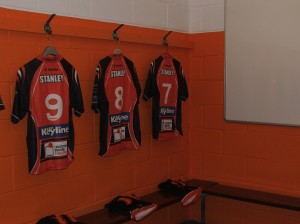 The refurbished changing rooms at the new club house are starting to take shape. The Home, Visitors and officials changing rooms are now complete with the home dressing room looking resplendent in tangerine and white. The new changing rooms will be available towards the start of the 2014 season in March 2014, although initially they will only be used on training and none match days as the pitches at the park will not have completed there regeneration by the start of the season. Match days will still take place at Stanley Park until such time as the pitches are ready 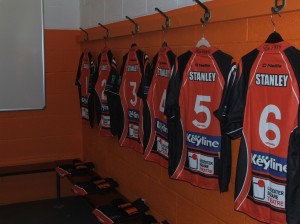 The club will make the new changing rooms available to other community groups wishing to conduct meetings and other activities whilst they are not in use for rugby league. It is hoped that this approach will facilitate greater use of the building and raise additional revenues for the club at the same time.