The club is pleased to announce the opening of the new re-surfaced car park at the club house, Kingscote Park, Layton. 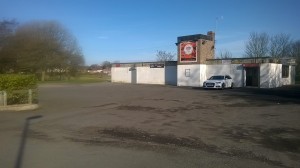 The club has been concerned for sometime over the general condition of the car park outside the club house. In recent years a number of trip hazards have developed for members of the club and also the wider community who use the park. Some deep hollows had developed on the car park which created significant water hazards during times of heavy rain.

The car park is not leased by the club and doesn’t form part of the lease for the building although it does provide much needed parking for users of both the club and the park.

Despite numerous attempts by the club and the Friends of Kingscote Park to either get the council to resurface or to raise funds to pay for the re-surfacing no progress had been made. 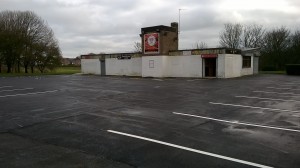 would allow the council to save the cost of establishing a temporary polling station on Shenstone Avenue during elections. As part of the polling station assessment process the condition of the car park was identified as the only negative.

Following some lobbying from the club and the help of staff at the Democratic Services Department at Blackpool Council the Council agreed to re-surface the car park and install 30 marked bays, including two disabled access bays.

The club will host the first election polling on 2nd May 2019 when the local council election will take place.