After a scrappy start to the game by Blackpool, Leyland took advantage to score 4 minutes in.

Blackpool picked up pace and defended well with a 20 meter run by Diss taking us well into their half only to “knock on” the ball and hand it back to Leyland. Blackpool continued to work as a team denying Leyland the chance to score with Jordan Hill holding up the ball after a 50meter sprint.

Blackpool’s Hall and cal McCrory worked hard to get Jones over the try line converted by Yorke. Leyland took advantage of Stanley’s undefended wing to score a further 2 try’s to finish the first half 16.6.

Stanley in the second half worked hard pulling Leyland into touch by Roberts and after a Blackpool scrum Leyland stole the ball only to be pushed into touch again by Bonham. After a series of knock-on’s  and scrums by both teams Leyland managed another try as the lads worked hard in the heat. 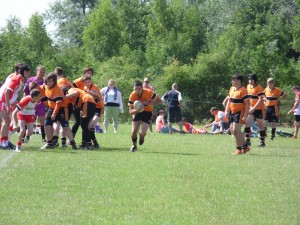 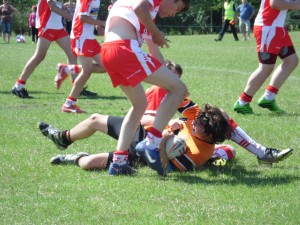