It certainly seems like there is a glut of talent shows on TV these days. And the daddy of them all was Pop Idol. Everyone seems to remember that seminal moment when contender, Will Young, took exception to the opinion of one Mr Cowell and gave him a piece of his mind. Buoyed with confidence Mr Young went on to prove he wasn’t “distinctly average”. And that’s kind of what happened this Sunday in Leyland.

It’s fair to say that Leyland weren’t expecting a star performance from Stanley, seeing as Stanley have been nilled twice on the bounce. But like the squeaky voiced Pop Idol warbler, our boys were not prepared to accept popular opinion and were about to show “anything is possible”. A try from Jordan Hindley in the opening minutes put Stanley on the front foot. Matt Webster put the ball down for a second and it seemed Stanley were having things their own way. But then Leyland woke up.

Shortly after Leyland’s first try, a break in Stanley’s defence deep in the Leyland half had their speediest player make a 60 yard run. But with the speedier Jordan Hindley giving chase it looked like the day was saved. Hindley managed not only to catch his prey but rip the ball away. However, the spectators were left aghast when the referee blew his whistle and awarded a try to Leyland as the player, ball less, hit the try line!  Thanks to the ref, the half-time whistle blew with the scores all square at 10 a piece.

The second half of the match was a bit like the second round of X-Factor. On the show they throw the individuals from the auditions together for a group performance. Stanley, fired up from the first half and together with some stage direction from assistant coach, Mark Holden, were back in form. On the Leyland side, the harmonies weren’t quite right, there was some limelight hogging, and some finger pointing when things didn’t quite go to plan.

Double act, Danny Stretton and Dean Harding gave their usual performance in defence. The forwards, Matt Stelfox, Connor Willis, Callum Green, went shunting through the best Leyland could offer. And the legs of Ben Hindley, James Guy, Harry Trask and Olly Tribe were put to good use. On the wing, Trask, narrowly missed out on a try when a ball travelling 15 degrees backwards was ruled to be forward. But this was of little consequence as a barrage of Stanley tries came from Nathan Winter, CJ Tyrell, George Guy and Matt Webster. Conversions from Webster and Phil Hardy-Dearness added to the tally of points. Webster’s third try of the day was a definite highlight.

After finding his forward progress blocked, he executed a perfectly weighted punt, collected the ball on the bounce and after a 35 yard sprint to put the ball down between the posts! There was no need for Ant and Dec to reveal the results of any public vote. Stanley were by far the strongest performers with a final whistle score of 34 to Leyland’s 16.

This Sunday, Blackpool Stanley showed they have regained their X-Factor. Sorry, Leyland Warriors but today you were in the Gareth Gates spot. But like Mr Gates, you were quite likeable gentlemen. And the Stanley boys look forward to meeting up with you again next season! 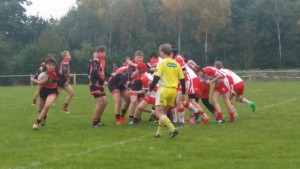 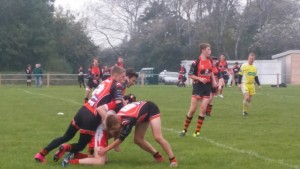