The presentation night for the junior section was held at Talbot Conservative Club on Friday 6th December. Guest of honour was Graham Pitman. Graham was a founder member of the club in 1979 and has had a association with it ever since. Graham said “It’s a great honour to be asked and a privilege to present the awards to such a great bunch of players who represent the future of the club. The current officials and coaches must be very proud of what they are achieving” 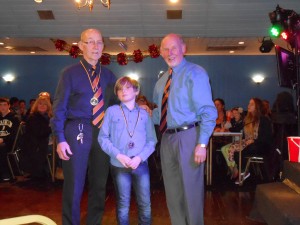