Blackpool Stanley has had a number of headquarters over its 30 year + history. Initially the club used the Commonwealth Club on Central Drive for all of its off pitch activities. Those of you who are local will realise that the Commonwealth Club no longer exists. It was demolished in the 2000’s to make way for another building site, long after Blackpool Stanley had moved on. The club had some migrant years after the Commonwealth Club, visiting amongst others, The Argosy Club and Poulton Sports and Social Club  before finding itself at Blackpool Cricket Club. The Cricket Club has served as the clubs Headquarters since the early 1990’s.

The club has always had a desire to locate all its activities (training, playing and socialising) at one venue and in 2011 an opportunity arose to move to a venue that would facilitate such an ambition.

The club partnered with Layton Juniors FC and took a joint lease for the sports pavilion at Kingscote Park in Layton.. The park had previously accommodated six football pitches and the club felt that the opportunity to move to the park and take on the abandoned pavilion was to good an opportunity to miss. Both clubs along with the council, councillors and the Community Foundation for Lancashire contributed to an initial pot of money of circa £25K to make the building secure and water tight after many years of little or no maintenance. Most of this money was spent in the first two years.

Stanley’s supporters and sponsors, primarily Keyline Builders Merchants, contributed materials in kind to help with the project. Although the project progressed the relationship between the two clubs did not bode well for the future and in late 2012 the clubs and the council decided that it was in the best interests of the building project for Blackpool Stanley to become the sole lease holder. 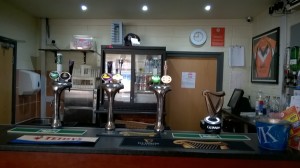