Former Blackpool Stanley Coach and Treasurer Gerry Collingwood has died at the age of 79. Gerry past away peacefully on Sunday 9th February 2014 at Clifton Hospital surrounded by his family. 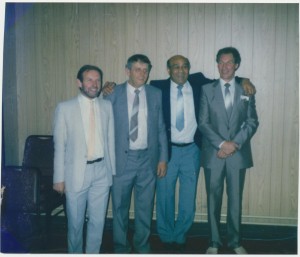 Gerry was a great supporter of the club and during the clubs existence had performed a number of roles at the club including first team coach and club treasurer. He will be sadly missed by many at the club (both past and present members) who had the privilege of working with him as players and administrators both on and off the field. When Gerry joined the club in the early 1980’s he brought a wealth of experience from his playing days at Wigan RL and Blackpool Borough and was keen to help the young players at the club develop their own skills. He spent many hours helping individuals strengthen their own playing skills which ultimately paid off with players gaining representative honours at both district and national level. Gerry ultimately laid the foundation for arguably the most successful open age playing days at the club when the first team progressed through the NWC counties divisions to Division 1.

In recent years Gerry continued to support the club with its development ambitions, he was pleased to see the club gain its own club house and was enthused by the development of junior and youth rugby at the club. Despite suffering with dementia he attended club events when he could and helped with the annual presentation night awards in 2010.

The thoughts of everyone at the club, past and present, are with Gerry’s family at this difficult time.

Gerry’s funeral is to be held on Wednesday 19th February 2014, 12:00 at Lytham Crematorium.
The family have said that they would prefer no flowers but donations to the Alzheimers Society.