The club ran a successful trip to the third test at the DW stadium, Wigan between England and 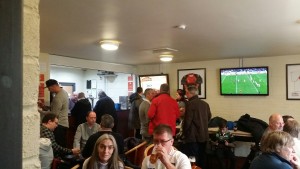 New Zealand on Saturday 14th November 2015. Sixty one people gathered at the club house for bacon butties and refreshments prior to an 11am departure. 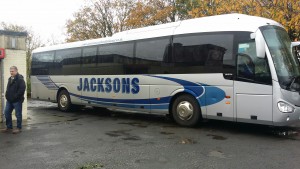 Jacksons Coaches provided the transport and shortly before 11am the club emptied and the coach filled ready for the off. A full coach left at 11am with high expectation of an England win and  a series victory against New Zealand for the first time since 2007. 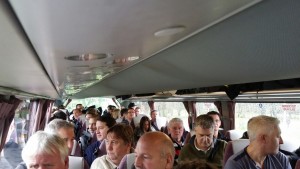 The journey encountered the usual DW match day traffic congestion but fortunately everyone was safely in there seats ready for the 1pm kick-off.

A close arm wrestle of a first half finished with England leading 8 – 6 at half time. England had a dominate 20 minutes in the second half and went in to  a 20 – 6 lead with 10 minutes to go. Everything going to plan for the perfect day. New Zealand, the world champions, just don’t lie down, and were determined to make  a contest of it right up to the final whistle. The Kiwi’s scored two unconverted tries and with only five minutes remaining and with the score at 20 -14 it was definitely “squeaky bum” time for the England Supporters. England hung on for the victory and to take the series 2 – 1.

Everyone returned to the club house to be greeted by a touch of Scotland. Thirty-five students from Glasgow University had chosen to visit the club, play a game and start their end of season tour with a few beers in the club room. Everyone was in high spirits with the England victory and the sound of the pipes ringing through the club house. 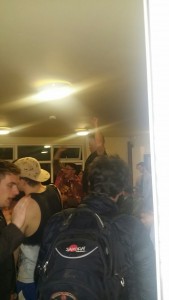 As the pipes blasted out to the sound of Flower of Scotland those locals with Scottish origins took to there chairs and joined in the chorus, ” Mick O’Hara thought he’d died and gone to heaven”.

A great day finished off in the club with a great atmosphere and some great revenue for the club. Nice One!!

The club will be running a trip to the Wigan v Brisbane world club challenge in February. For more info keep your eye on the website and facebook.