When Folly Lane hit the Kingscote Park pitch this Sunday, there was something of “where’s Wally?” in their Jerseys with their horizontal red and white stripes. Unfortunately, as it turned out for Stanley, in the game of “where’s Folly” it was pretty much a given where they would be found. In defence they formed a solid wall of red and white.

In attack they were well-drilled, heading through the gaps in Stanley’s defences and onward towards the try line. The thing eluding Stanley, in the first-half it seemed, was points.

After some personnel changes at half time, it was disappointing to find the only points clicking up were Folly’s, despite the odd chance given to the usual Stanley try machines of Jordan Hindley and Matt Webster. There were some other highlights too. In one play, Danny Stretton found himself under sky high ball for a spectacular catch only to be thwarted on the forward run. And in attack, the props, Connor Willis, Matt Stelfox and Callum Green each made the best of the balls they received from Hooker, Ben Hindley. But like with the Wally books and the search for that oh-so elusive character, the search for points was proving frustrating and exhausting.

To their credit, the Stanley lads never gave up. Dean Harding and Phil Hardy-Dearness were putting in last-ditch tackles. Sean Craven and Nathan Winter displayed their usual tenacity in one-on-one face-offs. And there was scrambling defence from George Guy, CJ Tyrell, James Guy, Harry Trask, Harry Kenyon and Olly Tribe, amongst others.

But by full time, and with no points scored and with 42 points against them the teamworking which has come to characterise this squad was notable, like Wally, by its absence. A change in mindset and some intense coaching should see our boys back on form next week. 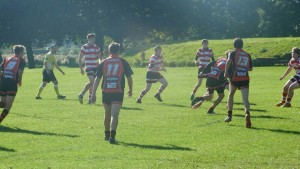