A glorious warm sunny afternoon at Kingscote Park saw Blackpool Stanley take on Bury Broncos for the first time in a scheduled league fixture. Previous results for both sides suggested it was going to be  a close encounter and so it turned out. The good weather drew a reasonable crowd that saw an entertaining game between two well matched sides. 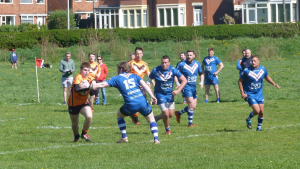 The game started slowly with both teams trying too establish there patterns of play. Stanley hadn’t played since early March and despite some good training sessions in the interim match readiness showed up in some departments. In their first real attack of the half some good approach work on the left flank saw Jordan Fairlie give a nicely waited pass to a hard working Josh McAllister to score in the corner, Stanley lead 4 – 0 after 3 minutes. That lead, however, didn’t last long and Bury equalled the score in the 10th minute, 4 – 4.

The game developed into a bit of a stop start affair with both teams clocking up penalties for a range of misdemeanours, however in the 25th minute McNish launched a high bomb from just inside the Bury half which the full-back struggled with from the moment it started it’s decent, the Stanley chasers got the benefit of the inevitable bouncing ball as it crashed to the ground some distance from the defending full back. With the ball in the hands of Joe Connell he evaded some cover tacklers to score in the corner, McNish converting to make the score 10 – 4. With only 5 minutes remaining of the half Bury scored to make the score level at half time 10 – 10. 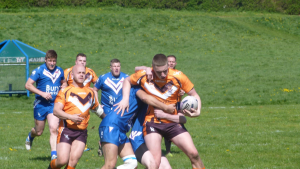 Stanley took an early lead in the second half. Good work by Jones and McNish in mid field saw an off load to Hibbert who crashed over. 14 – 10 to Stanley, but within the next 3 minutes Bury scored a converted try to take the lead 14 – 16. Hibbert went over after scooting from acting half back close to the line to re-establish the Stanley lead after about 20 minutes of the second half. 18 – 16. Stanley worked hard to try and extend the lead and secure the victory but with only 10 minutes to go conceded a penalty which Bury scored to level the score, 18 – 18 and with only moments left Bury secured the victory with a converted try, 18 – 24.

It wasn’t to be Stanley’s day, it was a close game which could have gone either way.

Stanley will  take some encouragement from the game and will be glad to be back playing again.